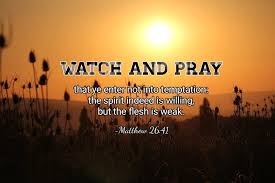 36 Then Jesus went with them to a place called Gethsem′ane, and He said to His disciples, “Sit here, while I go yonder and pray.” 37 And taking with Him Peter and the two sons of Zeb′edee, He began to be sorrowful and troubled. 38 Then He said to them, “My soul is very sorrowful, even to death; remain here, and watch with me.” 39 And going a little farther He fell on his face and prayed, “My Father, if it be possible, let this cup pass from Me; nevertheless, not as I will, but as Thou wilt.” 40 And He came to the disciples and found them sleeping; and He said to Peter, “So, could you not watch with Me one hour? 41 Watch and pray that you may not enter into temptation; the spirit indeed is willing, but the flesh is weak.” 42 Again, for the second time, He went away and prayed, “My Father, if this cannot pass unless I drink it, Thy will be done.” 43 And again He came and found them sleeping, for their eyes were heavy. 44 So, leaving them again, He went away and prayed for the third time, saying the same words. 45 Then He came to the disciples and said to them, “Are you still sleeping and taking your rest? Behold, the hour is at hand, and the Son of man is betrayed into the hands of sinners. 46 Rise, let us be going; see, My betrayer is at hand.” (Matthew 26:36-46)

The directives from Jesus to His disciples were clear. Yet, they did not watch. Instead, they slept, and they were not praying in this somnolent state. His companions, His friends, the chosen ones who would carry out His mission when His purpose on earth was fulfilled could not even stay awake, watch, and pray. Three separate times, Jesus came to them and found them asleep.

Three separate times. Jesus prayed to His Father as the disciples slept, asking if what is to come could somehow, if it was possible, pass from Him. Yet, He still acknowledged it was His Father’s will that He would obey, not His own. He was awake. He prayed. He stayed with His Father.

There was a scattering of the disciples as Jesus was taken. “And they all forsook Him, and fled.” (Mark 14:50) They were not asleep this time. Awake to what they saw, they might be taken too by association with Jesus. They did not stay with Him, except Peter who turned back and followed, but at a distance with the crowd. Yet, he did not stay with Jesus in loyalty.

And what of us, His disciples today? Have we stayed? Are we watchful? Are we praying? Are we awake? Have we risen to His call to teach others about Him?  Are we truly following our Lord Jesus in the open, not the shadows?

We have a Trinity of Promise, Light, and Hope to guide us

in the Father, the Son, and the Holy Spirit.