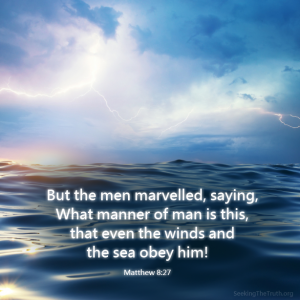 23 And when He got into the boat, His disciples followed Him. 24 And behold, there arose a great storm on the sea, so that the boat was being swamped by the waves; but He was asleep. 25 And they went and woke Him, saying, “Save us, Lord; we are perishing.” 26 And He said to them, “Why are you afraid, O men of little faith?” Then He rose and rebuked the winds and the sea; and there was a great calm. 27 And the men marveled, saying, “What sort of man is this, that even winds and sea obey Him?”(Matthew 8:23-27)

24 And they went and woke Him, saying, “Master, Master, we are perishing! 25 And He awoke and rebuked the wind and the raging waves; and they ceased, and there was a calm. 25 He said to them, “Where is your faith?” And they were afraid, and they marveled, saying to one another, “Who then is this, that He commands even wind and water, and they obey Him?” (Luke 8:24-25)

As I write, the March winds are howling. If the pond that I can see from my window was not frozen, the waters would be churning in agitated motion with waves lapping against the banks. It would not be a safe place for a small boat with passengers.

The disciples were not on a small pond but on the sea in a boat “swamped by the waves” during a great storm. And Jesus was asleep. They called out to wake Him, so He could see their dire dilemma, addressing Him as Lord, Teacher, or Master in these accounts. Yet Jesus was, also, referred to as a man. When they pondered the magnitude of power needed to calm the winds and sea, indeed, this was no ordinary man. “What sort of man is this…?” “Who, then, is this…?” Did the question reflect a storm within of uncertainty, of fear regarding this man Jesus? The disciples had witnessed His miracles. Yet, the mortal mind will engage in human reasoning to explain the obedience of the elements to this man Jesus: “What sort of man is this…?”

Jesus rebuked them for their lack of faith. Haven’t we all been there, in the storm, facing the tumult, fearful of the outcome? Did we think Jesus was asleep? The disciples reached out to Him. Yet, they did not comprehend His power and authority. Do we, likewise, fail?

The storm may be daunting: “You are in respiratory failure.” “You have Stage 3 cancer.”  “Your baby is stillborn.” “Your mother passed in the nursing home in COVID restrictions.” But Jesus IS awake and living. He waits for us to reach out to Him through our fears, our despair, our heartaches and tears. And He can and will give us the saving calm we need. “Peace! Be still!” It is up to us to accept His peace, His presence, His plan, and His love which may involve a rebuke for our lack of faith.

Be strong and of good courage, do not fear or be in dread of them: for it is the Lord your God who goes with you; He will not fail you or forsake you.” (Deuteronomy 31:6)

Keep your life free from love of money, and be content with what you have; for He has said, “I will never fail you nor forsake you.” (Hebrews 13:5)

We cannot turn to anything or anyone else but Him for the salvation and peace we need—whether we are in the small boat on the pond dealing with the lesser problems in life or in the boat on the sea during the most difficult storms.